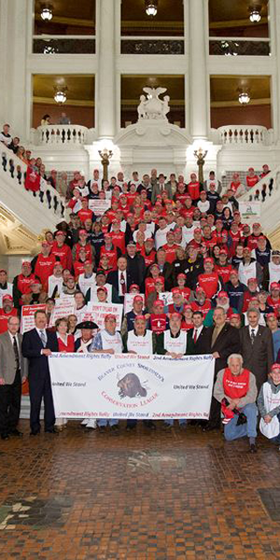 Two bills that critics have said could land local governments in court defending gun control measures are being reintroduced in the 2017 state General Assembly.

House Bill 671 and Senate Bill 5 each include language from previous bills that would allow “a membership organization” to sue a municipality over gun control measures believed to supersede state regulations.

HB 671 and SB 5 were referred to the judiciary and local government committees Thursday.

“Where no uniform state laws are in place, the result can be chaotic as restrictions change from one local jurisdiction to another,” Keller wrote in introducing the legislation. “Where so many different ordinances are allowed to exist, citizens with no criminal intent are placed in danger of breaking restrictions where they don’t know they exist.”

State Sen. Wayne Langerholc Jr., a Republican serving Bedford, Cambria and part of Clearfield counties, said in a statement that varying local regulations put an undue responsibility on visitors to the state.

“Furthermore, it is unreasonable to require residents of Pennsylvania and citizens passing through from other states to be aware of every firearm ordinance as they pass through each local jurisdiction” Langerholc wrote in his letter introducing SB 5.

Both bills retain language from their previous session counterparts, HB 2258 and SB 1330, which state Sen. Daylin Leach, D-17, said could have sent local governments to court against membership organizations like the National Rifle Association.

The language carried over into the new bills allows a “person adversely affected” by a municipality's local gun laws, including a membership organization, to sue the local government for damages.

Leach, whose district covers a part of Montgomery County, fought against a previous state law that had a similar definition; a court struck down the law in 2015 on the grounds the legislature broke a state rule when passing it.

The law, known as Act 192, was introduced by state Rep. Daryl D. Metcalfe, a Republican representing Butler County, and was primarily aimed at cutting down on scrap metal theft. Lawmakers, however, included firearm regulations prior to the bill passing the state Senate in a 34-14 vote.

Former Gov. Tom Corbett signed the measure near the end of his term, and the law took effect in 2015.

Leach filed suit, and the Commonwealth Court agreed the bill violated the state's “single-subject rule” and was unconstitutional. The rule prevents state bills from regulating more than one subject.

Act 192 was struck down in July 2015, but not before about 20 municipalities in Bucks and Eastern Montgomery counties repealed or replaced ordinances regarding firearms rather than risk going to court against groups like the NRA.

The municipal laws ranged from restricting firearms in public parks to reporting lost or stolen firearms to local police.

As of last year, Jenkintown was the only municipality in Bucks and Eastern Montgomery counties to reinstate its lost or stolen firearm ordinance after repealing its local law in 2015.

On Friday, Leach was again critical of the current Senate bill, which he called "preposterous" and "literally insane."

"One of the things about this bill is you don't have to prove, as the plaintiff, that the municipality passed anything that's unconstitutional," Leach said. "All you have to prove is that the policy or whatever it is has the word 'gun' in it."

Keller said Friday that critics of the bill, which he's attempted to pass three times, bring up possible lawsuits from the NRA as a popular scapegoat, but added the reason membership organizations are included in the bill is to protect the rights of local gun clubs and similar establishments.

While critics say the bills could open the doors to allow a group like the NRA to sue a local government, Keller said writing a law that would protect local gun groups while exclude national ones would border on unconstitutional.

This news organization was unsuccessful reaching Langerholc for comment.